we’re looking into using renku for a lecture using gurobi. They offer licenses that work with containers but seem to be somewhat particular about how to work with them in containers. Is it possible to attach “secret” files to containers on a per session / user basis?

The Web License Service (WLS) is a new Gurobi licensing service for containers. WLS is compatible with containers running on Docker and Kubernetes, including hosted environments on the Cloud such as Amazon Web Services (ECS and EKS) and Microsoft...

Hi @a_user, there is currently no straightforward way to attach a file to a session on a per user/session bases.

What does “secret” mean? Can the user who is running that session access the file?

Here is how you can do this:

Note that in both of these cases the user of the session will have access to this license file.

Does one of these options seems like something that may work for you?

Thanks for your reply. Secret in the sense that it’s user specific when starting sessions from a shared project. Aka not a shared license file in git. The link to docker hub has a description for kubernetes, but I don’t think that functionality is exposed through renku. The license file itself (or ID in case of an env variable) will be provided by the students individually, so no issue with them accessing it.

If possible it would be great to avoid having to upload a license file on every session start. The expected location is outside of the project folder, though a env variable should work for the path.

We don’t control the license server so getting access to the user credentials on renku wouldn’t help either.

From what I understand here docker-optimizer/PARAMS.md at master · Gurobi/docker-optimizer · GitHub it would be possible to retrieve the license “automatically” but that requires a set of personalised env variables. I don’t think renku has something like that?

@a_user the newest version of renku has the ability to set custom environment variables before starting a session that will be available in the session. So you could set these every time you start a session and have the license in the session.

This has not been deployed anywhere but upgrading to this version is not hard. Which renku deployment are you using? Is it at University of Fribourg? If yes, I think I may have already spoken to a colleague of yours about this. 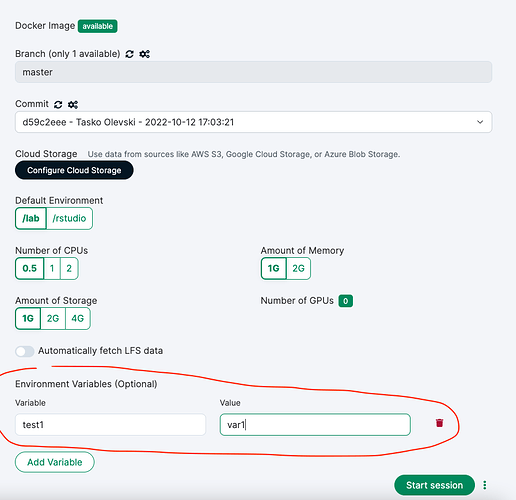 Indeed we had a request recently at the University of Fribourg for using the Gurobi optimizer in a Julia environment and for a classroom use, which closely resembles your request.

Based on our experience,

However, this project will not work without the gurobi.lic file (free for academic use) which you will have to download from your Gurobi account. As the Gurobi WLS documentation states :

the gurobi.lic file will always contain the following three lines:

These give the WLS license ID, the access ID for that license, and the corresponding secret key. These credentials are private and should not be shared with anyone who is not entitled to use your license.

In a running Renkulab session you should upload your own gurobi.lic file to your home folder (a.k.a. /home/jovyan/work/gurobi-wls-project-setup). As the environment variables have already been specified in post-init.sh, the Gurobi optimizer should be available immediately.

You can test the installation of the license from a terminal by running the command gurobi.sh. Simultaneously, you can also check the tokens issued by Gurobi for the containers associated with your gurobi.lic file.

Going forward, you need to commit the changes (addition of the gurobi.lic file) in your own project (clone/fork etc.) if want the changes to be persistent. Also, in keeping with the Gurobi licensing requirements, this project will have to be private. And finally, students can upload their own license files to their Renku sessions/projects for your class.

@tolevski We’re at eth and haven’t decided yet where it will be run, either renkulab or if there’s going to be an instance available here.

Those env variables look quite interesting, though I can’t tell you right now if they would be all that’s needed. Can they be fixed per user&project (and remembered between sessions) or do you need to put them in repeatedly every time a new session gets started?

@champost Thanks for your input. If I read the docs right setting env variables with these values gurobi should be able to acquire the license automatically without uploading the license file explicitly.

The Docker example here passes these license key-values as env parameters, though I have to check if they rebuild the license file from them or if that works without further intervention.

Right now the env vars need to be put in on every session start, though they can be included in a session autostart link. We do want to support more permanent storage of secrets/env vars in the future, but don’t have a fixed timeline on when and as you can imagine, there are a lot of security considerations to make before adding this.

@a_user What I provided was a MWE for using Gurobi on Renku. If your students can make private forks of the my project, download and commit their own gurobi.lic licence file (a one time procedure) at the outset of your course then you can concentrate only on your course content for the rest of the semester !

You could also, as Gurobi is free for academic use, commit your gurobi.lic licence file to a private fork and enable access to your students. They would then use tokens issued under your WLS license for the containers they start. You will need to check the upper limit of container sessions for a single WLS license, which I think is quite large.

IMHO, testing Kubernetes/Docker env. vars. within Renku feels a bit excessive (a high effort/low impact task) for your use case.

The project will be a collaborative one between a small group of students each, hence a shared fork, and the need(?) for separate licenses in a project. Though I will check how many tokens can be used for any given license simultaneously and see if that is an acceptable solution.

I was also searching for it and found the following (difficult to find) information on the possible number of concurrent sessions :

However, if the recorded usage goes over the baseline for too long or by too much, the token requests may be rejected, and your application will not be able to start new optimization. Note that you cannot release a token, even if you are done using Gurobi. This means that if the container or machine is shut down before the token lifespan has been reached, it will still count until its expiration time (5 minutes by default).

For example, if the license baseline is 2 concurrent sessions, you can start 3 or 4 containers/machines to perform a rolling update. However, if this usage continues for several minutes, or if you start even more containers/machines, your application may not be able to start new optimization.

The “default” license baseline seems to be 2 concurrent sessions (at least in my case).

@a_user just to summarize this discussion here are you options:

Let me know if you need anything else. Also let me know what you ended up using and how it worked.